Cooperation of the Republic of Belarus with the OPCW develops positively, including intensive contacts with the leadership of the Organization, enhanced expert interaction, constructive dialogue with key member states on the OPCW issues. The opportunities of regular training for the Belarusian specialists and receiving technical assistance from the OPCW are effectively used. Belarus fully implements its obligations under the CWC.

A high level of dialogue with the leadership of the Organization is installed and maintained. On October 2, 2012 in New York a meeting took place between the Minister of Foreign Affairs of Belarus Mr. Vladimir Makei and the Director-General of the OPCW Ambassador Ahmet Uzumcu. A wide range of topical issues of mutual interest has been discussed during the meeting.

An official visit to Belarus by OPCW Director-General Ambassador A.Uzumcu in May 2014 gave a significant impetus to the development of relations between Belarus and the OPCW.

The tribune of the OPCW is regularly used to voice the position of the Republic of Belarus with reference to the OPCW’s prospects and priorities of the modern stage.

Within the framework of Belarus participation in the work of the OPCW the Minister of Foreign Affairs of the Republic of Belarus Mr Vladimir Makei delivered a speech during a high-level meeting on the occasion of the fifteenth anniversary of entry into force of the Convention on the Prohibition of Chemical Weapons, which took place on October 1, 2012 in New York City.  This significant event was used to present the approaches of Belarus towards to the most pressing problems of chemical disarmament and key activities of the OPCW.

Membership of Belarus in the OPCW Executive Council which is the main governing body of the Organisation in 2015-2017 allowed Republic of Belarus to make a greater contribution to the joint activities aimed at achieving the strategic objectives and priorities of the OPCW and to participate in decision-making process required for the efficient operation of the Organisation. It also helped to use Belarusian industrial, technological, scientific and human potential in OPCW activities aimed at maintaining international peace and security as well as to make a practical contribution to the development of international cooperation in peaceful using of chemistry.

International events held in the Republic of Belarus under the auspices of the OPCW raise the status of Belarus as one of the leaders in the implementation of the Convention on the Prohibition of Chemical Weapons.

The full-fledged training courses under the auspices of the OPCW “Rescue operations in the areas of chemical contamination” organised by the Ministry of Emergencies of Belarus with the assistance of the Technical secretariat of the OPCW in the Republic of Belarus became an important event in September, 2013. The success of the courses made them regular event.

On November 9, 2020 Permanent Representative of the Republic of Belarus to the Organisation for the Prohibition of Chemical Weapons (OPCW), H.E. Mr Andrei A. Yeudachenka, presented Letters of Credentials to the Director-General of the OPCW, H.E. Mr Fernando Arias Gonzalez. 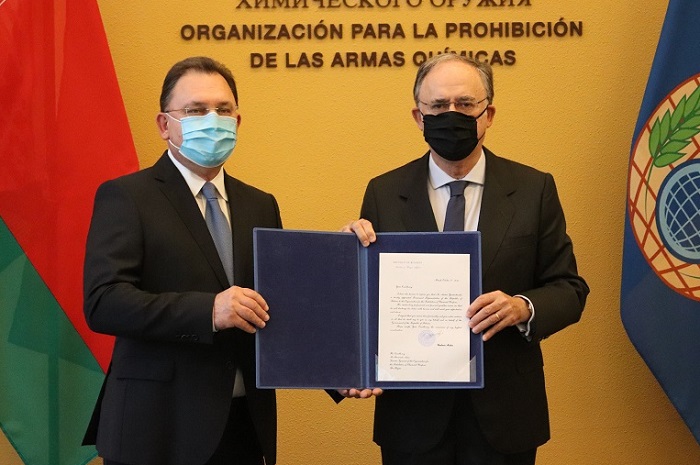